Send as a Gift

To send as a gift notify us at checkout. The book will be sent all tied up in a bow along with your message!

Pinch of Nom: Quick and Easy

Pinch of Nom isn’t a phenomenon. A phenomenon has a beginning and an end, but this thing – at first a Facebook group, then a food website, now a record-breaking cookbook – is as vast, as unstoppable, as the universe expanding. Authored by duo Kay Featherstone and Kate Allinson, Pinch of Nom was published in the UK …in just three days it sold more than 210,000 copies. To put this into perspective, in 2015 Ella Mills became the fastest-selling debut cookbook author of all time, selling 32,1 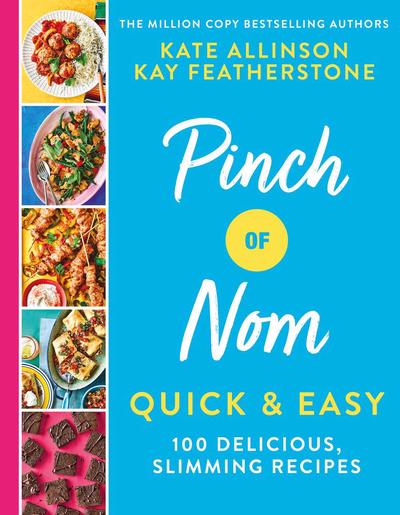 44 copies in one week. – The Guardian

Keen to lose weight in a way that didn’t feel punishing, Allinson and Featherstone – sometimes referred to in the press as the “two fat chefs” – set up the Pinch of Nom Facebook group in 2016 with just a handful of members, posting recipes and sharing slimming tips.  They’re now up to 1.6 million so they must be doing something right!!

This is the follow-up to Pinch of Nom which came out last year and has now sold over a MILLION copies.   From family favourites to batch-cook basics and speedy sweet treats, Pinch of Nom Quick & Easy is packed with dishes so delicious, apparently, that you won’t even notice they’re slimming!  Its got quite an old-fashioned vibe – Quiche Lorraine, Toad in the hole, Chicken Kiev but I think thats it’s appeal.

I tried the Harissa and Honey Chicken which was heavenly!

Fill in your details below and we’ll get back to you on delivery times.